Hi friends, sorry I haven't been blogging lately.  Had a little bout of illness and had to have some surgery.  Doing much better now.  The daylilies are growing like gangbusters up here in Massachusetts, along with so many other plants.  Can't remember when I had lilacs and irises blooming in April like I do this year.  The downside is that I have a ton of weeds growing too.   Hopefully, the doctor will give me the go ahead to get out in the garden soon.

Take care all and here's wishing you all a double rainbow with its pot of gold at the base of each.  Life is well worth the effort. 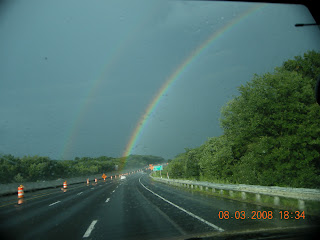 Posted by Mary Collier Fisher at 5:45 PM No comments:

Hi friends, hope you like the look of my new blog.   I had help from the Queen of Blogs, Ms. Nikki Schmith. Thanks very much, Nikki.  In reading over the information noted on the 2012 introductions mentioned in my earlier post, I remembered that both have demonstrated a small incidence of polymerous blooms.   This means that there are more than the usual 3 petals and 3 sepals that you usually see in daylilies.   Thought you might like to see what this looks like when it happened to 2012 introduction 'Phill Warbasse'.


See how the plant has two extra stamens in the center but still has just one pistil.  If you set a seed pod on such a bloom, you would get a four chambered seed pod instead of the usual three. This is a trait that has fascinated me for years.  My first consistent daylily that I purchased with this trait was an oldie called 'Towhead', I believe.
Posted by Mary Collier Fisher at 7:27 PM No comments: 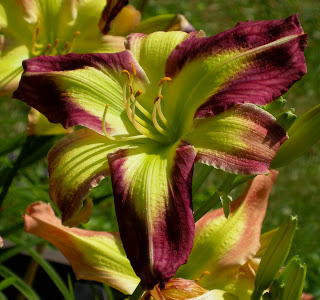 I traveled to Nashville, Tennessee to attend the most enjoyable Mid-Winter Symposium of AHS Region 10 a few weeks ago and shared pictures of the hybridizing program of George Doorakian - including the two introductions shown here.


This first one featured here on the left is PHILL WARBASSE.  Phill Warbasse is a 5.5" dormant diploid with a  34" scape, with 3 branches and 26 buds.  This beautiful Emerald Starburst kid has a large greenish/yellow eyezone spilling onto sepals and petals and a 3/4" dark red picotee on petals and sepals.  Very vigorous and stoleniferous.  10% polymerous.


Below is SENATOR EDWARD M. KENNEDY, a dormant diploid, 36" tall scape with 24 buds, 7" diameter flower, medium red petals with a large greenish yellow eyezone. Sepals have a 1/2" light red band around the perimeter with the eyezone covering the remaining area. An eye stopper in the garden with re-bloom. This cultivar is also an excellent bud-builder.  The parentage includes Rose F. Kennedy as a the female parent.  Very fertile both ways.  15% polymerous. 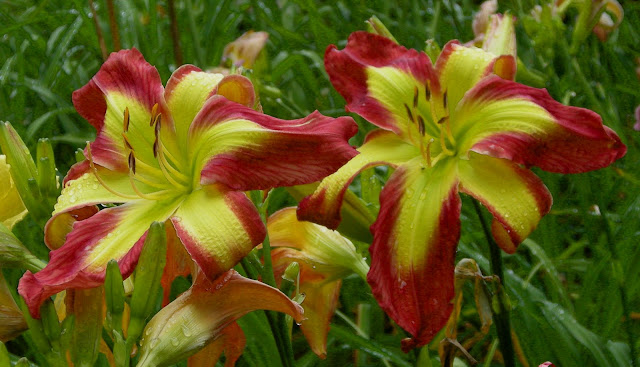 You may see all the Doorakian introductions available for sale at the Nor'East Daylilies website.  Click on over and see what is still available!

Posted by Mary Collier Fisher at 4:47 PM No comments: 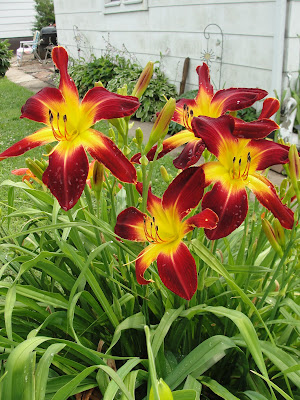 From October 13-16th, I had a great dose of daylily people, when the AHS Board of Directors, Staff and Special Committee Chairs were able to combine the fall Board meeting with the Region 5, Fall Fling held in Atlanta, Georgia. After two days of various Board meetings on Thursday and Friday, several of us were able to attend portions of the Fling that lasted until about noon on Sunday. Lots of good work done at the Board meeting and lots of great presentations at the Fling made for a great several days.

On Friday night after the Board meeting, as tradition established, we were able to announce all the new Awards and Honors winning daylilies to those in attendance at dinner. That night, Webmaster Tim Fehr put up pictures of the winners on the rotating home page.

Please check out all the winners here where you will be amazed at the variety of daylilies in all sizes, shapes, and colors. The two highest awards are the Stout Silver Medal that went to hybridizer gary Schaben for his flower, 'Northwind Dancer' and the Lenington All American Award that went to hybridizer Patrick Stamile for 'Ruby Spider' (pictured above).

Congratulations to both winners!
Posted by Mary Collier Fisher at 5:05 PM No comments: 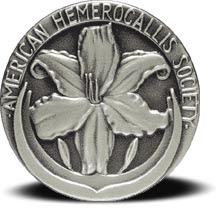 Mary Collier Fisher
Walpole, Massachusetts, United States
Mary Collier Fisher is the Past President of the American Hemerocallis Society (AHS). She is continuing her involvement with the Society by serving as the Members Portal General Manager for 2012. Her nursery, Nor'East Daylilies, introduces the daylily cultivars of George Doorakian of Bedford, Massachusetts. She has been involved with growing daylilies since 1980 and is a life member of the AHS. She gardens in Walpole, Massachusetts on a suburban 1/4 acre lot but has jammed loads of daylilies, other perennials, shrubs and small trees into her gardenscape. She is a founding member and current officer of the Patriot Daylily Society that meets generally at the Bedford Public Library on the first Saturday afternoon of the month.